I think we can all relate. Whether you’re doing a wall sit for the first time, picking up running, doing your first squat post-partum, or gunning for something like an hour record, your legs are bound to start talking to you…and chances are they’re not saying nice things! That’s what makes sticking to an exercise regimen so challenging. Exercise is hard. Workouts almost always have a painful moment, indicating failure due to fatigue is near. Then there’s the haunting knowledge that there will always be a something harder left to try, and someone stronger, faster, leaner. Why would we expose ourselves to that? Isn’t settling for the way we are easier, more comfortable?

You’re absolutely correct. Life would be easier without competitions, goals, and structure to worry about. No comparisons, no falling short, no failure. How great would that be…or would it? Call me old school, but I firmly believe the best way to grow is to experience the pain produced from doing hard things. Said pain can be emotional or physical, but it’s often both. Let me explain in two brief stories, both of which happened in the same weekend.

Like many (if not all) of you, I’ve had my share of conflicts with my parents. We don’t always see eye to eye, but nothing soothes the heart like a call home to Mama. Just 48 hours before I was set to lace up for one of the most physically painful events, my mom and I had a difficult conversation. Something inside me said, “Time’s up. Be honest and forthright without burning bridges.” I swallowed the lump in my throat and confronted my mother about the pains of the past. I noted how I’ve matured enough to finely match the right words to the feelings I had without lashing out. It was emotional, for both of us. She was able to apologize for the past, and I was able to effectively communicate about why I had shut her and my father out for the several years following his affair. It was painful to discuss, but not more painful than carrying it with me. It took courage, honesty, and thoughtful words on both my part and my mother’s. We listened to each other, which made it an effective conversation. While we acknowledged we have different world views, we were able to share emotional pains we’ve suffered, which honestly unites all of us. Hard things aren’t always physical.

Fast forward 48 hours. I nervously gulped an orange, caffeinated gel and tightened my cycling cleats for the 5th time. It was time. Time to take on the most painful, lonely event that exists: The Hour. The Hour is 60 minutes on a sloped track, on a fixed gear track bike, with no metrics, fuel, or hydration. Once the gun goes off, you are alone until you quit or reach 60 minutes. The pain is immediate. Fixed gear bikes are unique in that there is no rest within the pedal stroke, no ability to change gears, coast, or rest even for a fraction of a second. You are restricted to one position (referred to as aero or time trial position) hunched over your machine, praying for the end to come as soon as you start. An ominous black line guides you around the curved velodrome until your vision becomes blurry from a sustained maximal effort. I’ve done it once before, exactly one year ago when I set the elite women’s record at my local velodrome, and with Covid-19 decimating all other race venues this was the only opportunity to compete in 2020. I wasn’t prepared in the slightest. I had barely ridden my fixed gear bike and knew my muscles were going to ache sooner. I had forgotten all I’d learned in the previous year about gearing and cadence required to be successful on the track. So why did I agree to try and break my own record when it had every chance of standing another year?

I beat last year’s record by just over 1.6 km’s

The same reason I called my mother to confront her about the past: we cannot grow without experiencing hardships. Without pain, we cannot change. You may disagree upon first reading that, but spend some time reminiscing. Did you grow from the walk you took across the stage at your graduation, smiling while being celebrated? No. You grew while sacrificing time and sleep to study for challenging exams. I bet you learned from tearful and hurtful break up you went through, or perhaps you grew during the unexpected loss of your family member. Maybe you made the team but felt the stab of failure when you didn’t get put in, or added time to your event. Perhaps you are the great Jan Frodeno, the reigning Ironman Hawaii World Champion, who earned his ticket back to the great race only to walk the marathon in defeat. We don’t learn and grow from the happy moments. We learn and grow from the hard ones.

The takeaway: Expose yourself to hard things if you want to grow.

Enter the race. Call the relative or estranged friend. Start the workout. Sacrifice a few precious weekend hours to volunteer. Try the new recipe. Attempt the challenging hike. Pick up the weights. Set verbal boundaries with people that steal your energy. Take a new yoga class.

– Eddy Merckx, the most decorated professional cyclist in history.

Becca Kawaoka specializes in rehabilitation therapy, injury prevention, and sports performance. She met her future husband and co-coach, Elliot Kawaoka. Training and racing competitively became their lifestyle! Now, coaching athletes to reach their potential is a passionate expression of their love for the sport. Becca enjoys working with a range of client experience, from beginners to competitive amateur athletes. 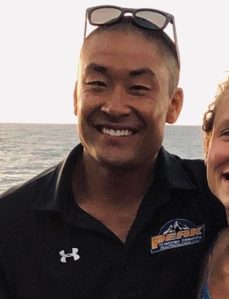 USAT Certified Coach, Elliot Kawaoka, has been participating in endurance sports for over a decade.  Along with numerous podium finishes, he has also qualified for the Hawaii Ironman World Championships multiple times.  Elliot loves the variety of triathlon training and devotion it takes to obtain his goals.  He finds joy and passion in spreading his enthusiasm for the sport and inspiring others to tackle their biggest dreams.